Findings from a ground breaking study could prove crucial in boosting the ‘economic viability’ of algae biofuel, showing for the first time that raw plants can be used as a carbon energy source for cultivation of a strain of microalgae. 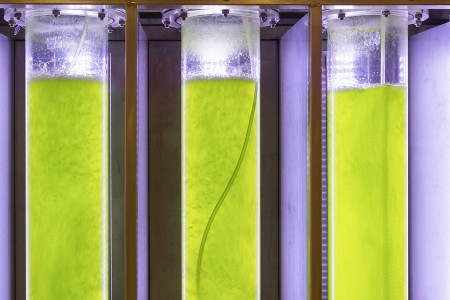 In a study recently published in the journal Algal Research, it’s revealed that a freshwater production strain of microalgae, Auxenochlorella protothecoides, can directly degrade and utilise non-food plant substrates such as switchgrass for improved cell growth and lipid productivity.

The research was carried out by scientists from Los Alamos National Laboratory and several partner institutions.

“We purport that utilisation of plant-based carbon substrates in addition to photsynthesis (mixotrophic growth) for biochemical assimilation into biomass, biofuels, and bioproducts, can increase cultivation productivity and improve the economic viability of algal-derived biofuels,” the authors write in the introduction to their study.

“Algae hold great potential as a source of renewable fuel due to their ability to produce refinery-compatible diesel and jet fuel precursors,” said Amanda Barry of Los Alamos’s Bioenergy and Biome Sciences group, lead author on the study, in a press release.

“Identifying algae strains that can use plant substrates, such as switchgrass and corn stover (the part of the plant left in a field after harvest) to grow faster and with more lipids suggests that waste plant material can be used to increase the productivity of algae during cultivation for biofuels or bioproducts. Pinpointing the unique enzymes and biochemical pathways algae use to break down complex plant lignocellulose increases our understanding of algal biology, and it opens up new avenues of future designer engineering to improve algal biofuel production strains,” she continued.